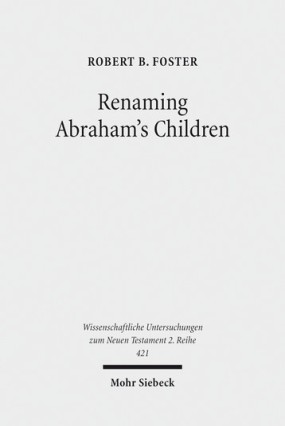 Paul’s Letter to the Romans deals with themes central to the Christian faith, which helps explain why, even after being read and reflected upon for nearly two millennia, lively conversations about how to best interpret it continue to take place. In his dissertation on Romans 9, Renaming Abraham’s Children, Robert B. Foster joins the time-honored tradition of “trying to think Paul’s thoughts after him,” to borrow N.T Wright’s turn of phrase (2009, p.x), attempting to show how Paul’s understanding of election was shaped by his prior engagement with the foundational stories of the patriarchs in Genesis (pp. 1-2). By tracing Paul’s interpretation of these narratives, Foster aims to help uncover a level of theological coherence in chapters 9-11 more frequently sought after than actually found (p.3).

The attention Foster gives to Paul’s usage of the Abrahamic narratives places him within a larger school of thought in scholarship, represented by figures like Richard B. Hays and N.T. Wright. These writers emphasize the idea that many of the more puzzling elements in Paul’s letters can be clarified when viewed as being undergirded by a deeper narrative-driven substructure (for an interesting set of essays examining this trend, see Narrative Dynamics in Paul, edited by Bruce Longenecker). Narrative approaches to Paul are often insightful, but they are sometimes criticized for being too subjective, unable to adequately deal with questions like, “when is a passage’s narrative substructure deftly submerged below the surface, and when is it just not there?” To make his proposal compelling, Foster has to show that he isn’t deaf to these concerns in Renaming Paul’s Children. END_OF_DOCUMENT_TOKEN_TO_BE_REPLACED