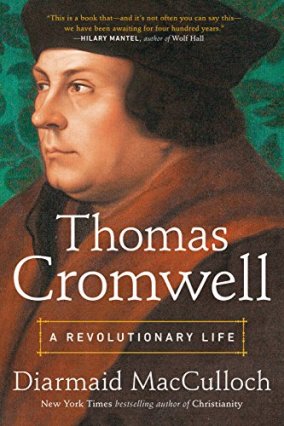 Thomas Cromwell’s administrative prowess, enigmatic personality, and the striking nature of his rise and fall provide rich material for both fans of Hilary Mantel’s novels and aspiring historians wanting to sink their teeth into the fraught world of 16th century Tudor England. For these audiences, I think Diarmaid MacCulloch’s Thomas Cromwell: A Revolutionary Life may become one of their more long-lasting guides and conversation partners. MacCulloch possesses impressive credentials as a religious historian of the English Reformation in particular and Christianity more generally, so from one perspective, it’s interesting to see him take on a biography of Cromwell, who is sometimes viewed as a coldly calculating, rather Machiavellian secular figure (4). One of MacCulloch’s aims in this work, though, is to subvert this estimation of Cromwell and show how his religious and political motivations were intertwined (4, 371).

In this biography, MacCulloch gives readers a serious work of scholarship, coming in at over five hundred pages in length, with an impressive number of pages of notes gathered in the back of the book. These details may give the impression that Thomas Cromwell is a struggle to get through—and it’s true that MacCulloch’s minutely reconstructed account of life in the English royal court shows no fear of diving into the historical weeds. However, his dry sense of humor shines through in the book’s prose, rewarding those willing to take a deep dive into Cromwell’s life while also possessing a sharp wit. MacCulloch is a master when it comes to telling an engaging historical narrative, and this biography is no exception.

MacCulloch admirably covers the basic facts of Cromwell’s life, and his approach will likely influence scholarly debate in a number of ways. More than previous biographers, he chooses to dwell on Cromwell’s early life, including his formative years abroad and his time working under Cardinal Thomas Wolsey (4-5). By dwelling on Cromwell’s close relationship with Wolsey, MacCulloch sheds light on why Cromwell and Anne Boleyn were never as closely allied as one might expect, given their shared interest in furthering the efforts of English religious reform (340-341). Significantly, he thinks Anne’s role in Wolsey’s downfall was never forgotten by Cromwell.

Cromwell’s early association with Wosley also gives MacCulloch a path towards better understanding the dissolution of monasteries and other religious houses that Cromwell eventually oversaw. This suppression of English monastic life led to the transfer of vast sums of money into the coffers of the English government (551). However, this occurrence didn’t happen overnight, and MacCulloch argues that it wasn’t intended to be so complete and systematic from the beginning (488). It was actually back during his time under Wosley, prior to England’s break with Rome, that Cromwell first became involved in closing down religious houses (73). Back then, though, MacCulloch suggests these moves were oriented more towards monastic renewal than suppression. Once again, MacCulloch seems to suggest, history was more contingent that we frequently like to believe.

On a more human note, MacCulloch delves into Cromwell’s relationship with his son, Gregory. Granted that Cromwell could be cold-hearted in his political dealings, his involvement in Gregory’s life shows him to have been a man capable of genuine care and concern. MacCulloch thinks this is clear from his interest in his son’s education, as well as the kinds of risks Cromwell took to secure his son’s future and keep him from serious danger (70, 530). At the end of the day, it can’t be forgotten that Cromwell, just like the rest of those serving Henry VIII, had to frequently navigate unclear waters, working in a “roller-coaster collaboration with the King’s tempestuous emotional appetites” (342).

In addition to examining how this biography contributes to the historical study of Cromwell, it’s worth considering the book in light of MacCulloch’s larger body of work, which has largely focused on the contested nature of the Reformation in England. As Eamon Duffy, another distinguished historian, has noted, “The foundation doctrine of the English Reformation was neither sola scriptura nor sola fide, but the Royal Supremacy” (Saints, Sacrilege, and Sedition, 16). Henry VIII’s break with Rome didn’t have much to do with idealistic theological differences, but MacCulloch has gathered together an array of evidence to show that figures like Cromwell, Cranmer, and Hugh Latimer made the most of the occasion to work for religious changes not entirely unlike those pushed for by Continental reformers. In one of his earlier books, All Things Made New: The Reformation and Its Legacy, MacCulloch explains that he believes the nuanced, sacramental nature of much contemporary Anglicanism, which differs considerably from the stripped down Reformed tradition of John Calvin and John Knox, owes more to the 19th century Oxford movement and the writings of Elizabethan figures like Richard Hooker and Lancelot Andrewes (as well as the survival of the great English cathedrals) than the vision of Cromwell or Cranmer (224).

Having read most of his works, I think that MacCulloch’s conception of Anglicanism’s history is a tale of shifting trajectories. As he puts it elsewhere in All Things Made New, “Anglicanism is a product of the Reformation, though a peculiar one” (359). And by now writing a biography emphasizing Cromwell’s work as both a religious reformer and statesman, MacCulloch continues to flesh out his argument for not dismissing the Reformed leanings of the Church of England’s identity at this stage of the 16th century.

MacCulloch strikes me as being at peace with the contested nature of Anglican identity, though. He has observed previously that the Anglican Church has “oscillated between the poles of Protestantism and Catholicism” ever since its inception, which has brought about “an interestingly subtle and reflective version of Christianity in the process” (The Reformation, 531). In the end, I can recommend Thomas Cromwell, along with the rest of MacCulloch’s works, as an excellent way to dive into understanding the world of the English Reformation. Between his works and the writings of historians of the English Reformation like Eamon Duffy, readers will come away with something resembling a well-rounded perspective on this part of the Church’s story, which is no small accomplishment.

Disclosure: A copy of this book was provided by Viking Press for review purposes. The opinions I have expressed are my own, and I was not required to write a positive review.

1 thought on “Cromwell, the Reformation, and Anglican Identity: A Review of “Thomas Cromwell” by Diarmaid MacCulloch”