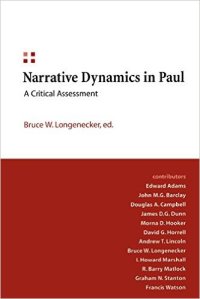 In 1980, J.C. Beker declared in Paul the Apostle that, “Paul is a man of the proposition, the argument and the dialogue, not a man of the parable or story” (p.352). At the time, he was far from the only one who took that as an assumed position. A few short years after those words were written, though, the winds of change began to blow.

Over the last few decades, significant parts of Pauline scholarship have drawn enthusiastically from the field of literary theory, resulting in an increased amount of attention being given to the evocative ways in which Paul’s language engages with and alludes to earlier biblical narratives, among other things.  END_OF_DOCUMENT_TOKEN_TO_BE_REPLACED