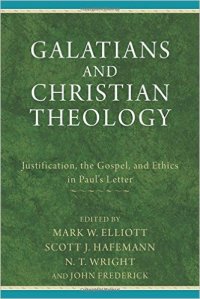 In this, the final post of our series looking at some of the essays in Galatians and Christian Theology, we are turning to Mariam Kamell’s, “Life in the Spirit and Life in Wisdom.” Kamell’s background is in the study of wisdom in the Epistle of James and in Jewish wisdom literature. She is currently a New Testament professor teaching out at Regent College in Vancouver, Canada.

The Apostles Paul and James were spiritual brothers in Christ. However, many get the impression that they must have been testy, quarrelsome siblings. Near the beginning of her piece, Kamell notes that, “There may be no two other epistles in the New Testament that have been so consistently contrasted to each other theologically as Galatians and James” (p.353). Martin Luther, in his typically blunt way, described James as someone who “wanted to guard against those who relied on faith without works, but was unequal to the task” (Word and Sacrament I).

Kamell thinks that many Christians have been too quick to pit Paul and James against each other, spending too much time focusing either on their contentious relationship suggested by Galatians 2 (“certain men came from James”) or “on their different views of the law and Abraham in Galatians 3 and James 2” (p.354). One common way of reading them in light of each other has been to interpret James’s insistence that “faith by itself, if it has no works, is dead” (2:17 NRSV) as meaning that true faith in Christ leads to good works as a necessary consequence of being made a new creation in Christ. An example of this can be found in Reformed theologian Thomas Schreiner’s 2015 book, Faith Alone, where he asserts that “justification is by faith alone, but it is a faith that expresses itself in good works” (p.206).

Rather than strictly focusing directly on the faith vs. works issue in her essay, Kamell instead chooses to compare Paul’s treatment of life in the Spirit in Galatians 5-6 with James’s account of living according to wisdom.
END_OF_DOCUMENT_TOKEN_TO_BE_REPLACED